Can I say how good a time I have at Founders fest 300 million times and NOT sound redundant? To you, maybe yes, but to me? No. I could say it another 300 million on top of that. I am always delighted to go to Grand Rapids, stop by Founders to have a Dirty Bastard Beer, and draw or paint with an AWESOME musical act.  The Crew of said location have been so kind to me to let me jump in the mix and take full advantage of the awesome audience that is always there. I will always have friends at Founders, and plenty of people to draw.

This past weekend was the Annual Founder’s Fest. I would say it is like the birthday party for the brewery, but other would say it is just an great freaking time. Namely, their choice for acts to get a crowd dancing. And this year they had G-Love and the Special Sauce headlining. I had to scoot up there and paint a spinner or two with that band. Not exactly Brahms, but very fun to groove to with a brush.

Might I say that “G”, (if that is his REAL name), was a pretty cool cat. Talked funny, but was eager to see the painting and took my card, but instantly was handed a Dirty Bastard Beer and who knows if he remembers the card?!

So I made some new friends, drew some caricatures, and had a great night of performance painting.

On such a beautiful 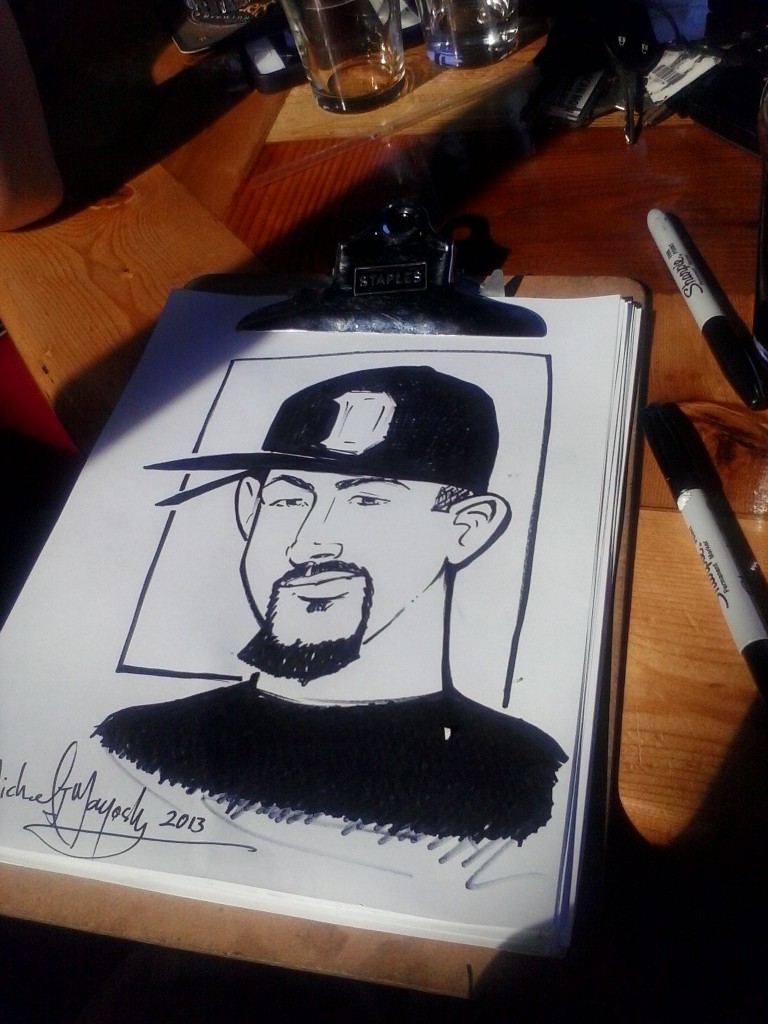 summer night, with such a fantastic moon… Who could not feel blessed to see these sights and breath the warm moist breeze from the west? I know my blessings in this life, and I am reminded at moments such as those.

Now… back to Springfield….

…but with one pit stop along the way…

I have a mural I keep as my little secret. I barely post about this one (yet), but have worked on it on trips back and fourth during road trips east the past three years.

This mural is located at an Eagle Scout Camp that is located near the southern shore of the Great Lake Michigan. Named Camp Topenebee. How I love this place. I have taken very, very few friends here, and the few I have taken, are very close friends to me.

Since 2011 when I was first asked to paint this mural by Bob Kindmark, I had approached this mural with patience. I first wanted to make something nice, but quick, then I fell in love with the time to be alone and paint… in the middle of no where with the birds and cool breeze from Lake Michigan. I could never rush this mural. I have now come and gone and have made a very visually deep and detailed mural about this camp. Becuase of the many visits, I have had many things to think about. So the mural changes over time. A time lapse has been taken and will be compiled one day soon for pondering.

I am (sadly) approaching finishing the last details in this mural. So this coming summer within about one or two more camping nights, I will be “done” with this painting. However…There is nothing to stop me from coming over the next 20 summers and camp and add more tree frogs to the hidden details. Or maybe a hidden Indian Chief? Anything is possible.

I will post the final images soon…..but until then? This is a preview to my secret mural for my Grandfather Larry. He was an Eagle Scout and more than likely would have loved to paint a mural with me.

This work should be there for 50 years or more… so swing by and check out this rarely seen mural of mine, (if you can find it!).

My Online Journal of My Travels